Humility and honesty rise to the fore when I think deeply about what is necessary to eradicate racism in global health. Each of us carries a unique responsibility in achieving this aspirational yet essential goal. In her June letter to the global health community, Loyce Pace reflected on the pressure of being an “only,” the weight of representation and the struggle not to replicate the power preferences established by the system within which she works. My unique responsibility as a global health leader is both overlapping and distinct from that of Loyce. I, too, must not reinforce and replicate biased systems. I must be vigilant about my inherent biases. I do not bear the mantle of being an “only.”

Many people have an “origin story” about how they entered global health (a bit of mine here), often based on seeing inequities in access to health care for the first time and being motivated to create change. Additional unspoken motivators impact how people act and speak in global health. Most are building a career, sometimes requiring extensive publishing, and becoming known for their expertise in a particular area. Others may be motivated by the notion of altruism, addicted to the feeling of being needed and the feedback that comes from “delivering” something that people appreciate. Some are drawn to validation as a “savior.” 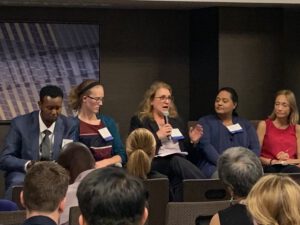 Dr. Janna Patterson speaking at a panel at the UNGA

Many in the global health community are quick to decry police brutality and explicit racism in the United States. Some are willing to discuss the privilege they carry within U.S. universities, courtrooms, and banks. Yet, few are willing to examine how they perpetuate systems of race and power in their global health work. This examination is hard to do. I offer for your reflection an example of my imperfect attempt to rise to this challenge.

Several years ago, I was asked to speak at a conference on Kangaroo Mother Care (KMC) in a certain African country. I planned to talk about what I had seen in KMC units in several countries and asked for special permission for a nurse who led one of these units to be allowed to attend as well. An astute white male colleague suggested this nurse could speak about KMC instead of me. Embarrassed that I hadn’t thought of that, I asked her. She declined and said she would not feel comfortable speaking on the stage. The compromise we reached is that I would interview her on the podium, she would speak in her language of choice, Swahili, and I would do some interpreting of her words in English. So, this is what we did. It was awkward. There were stops and starts, mostly we sat but when she got passionate about her words she would jump to standing and I would follow. She spoke half in English and half in Swahili and I did my best to interpret what came out in Swahili for the English speakers. We were both sweating. It was messy but authentic. I was inspired and uncomfortable.

Afterward I stewed over a million questions running through my head. Did I do the right thing? Did I amplify her voice or hinder it? Was this token engagement? Was she glad to be on stage or did she regret it? Ultimately, my takeaway was: I made a small step toward elevating the voice of a woman of color who had not been asked to speak. I shared the stage, but I was not successful in getting off the stage. Next time, I would think of this option sooner, support her confidence to be on stage alone and speak in the language she clearly spoke well enough (English) or find a professional translator for her language of comfort (Swahili). I would advocate well in advance for new voices out front.

I share this experience in the spirit of honesty and, hopefully, humility. I wonder if I, and we, have gotten closer to what “should” be. We clearly have a long way to go. But, often, progress comes as a persistent series of micro-steps (and missteps). It is messy. It requires self-reflection and discomfort. I hope that you will join me and commit to your own journey, personal and professional, toward a new global health order that embraces equity.