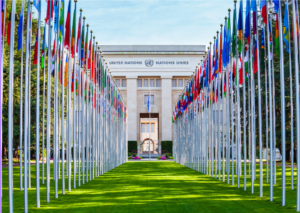 With so much to follow last week, including the re-election of WHO Director-General, Dr. Tedros for a second five-year term and the election of new members to the WHO Executive Board, GHC has outlined our top three takeaways from the 75th World Health Assembly:

The Sustainable Financing Working Group (SFWG) reached a consensus on its recommendations to provide more flexible and sustainable financing to WHO. GHC delivered its statement endorsing the recommendations of SFWG to increase the level of assessed contributions to 50% of the WHO base budget by the 2030-31 biennium, or sooner. The decision by the Health Assembly is a historic opportunity to secure and sustainably finance WHO, which currently operates with approximately 80% of its budget dependent on voluntary, mostly earmarked contributions.

Notable actions on human resources for health and health workforce issues included the adoption of the Working for Health Action Plan (2022-2030) and the Global Health and Care Worker Compact. The Action Plan, which was developed through a Member State-led process, sets out policy priorities to rapidly progress workforce capacity across three dimensions: planning and finance, education and employment, and protection and performance. The Compact was created at the request of Member States at WHA74 and outlines priorities for protecting the health workforce, including how to protect and safeguard the rights of health and care workers and promoting and ensuring decent working conditions. GHC delivered a constituency statement on this item, joined by the Task Force for Global Health, Save the Children, Women Deliver, and World Federation of Societies of Anesthesiologists which includes recommendations to Member States on how to strengthen the global health workforce.