The Fight Against AIDS, Tuberculosis and Malaria: The Global Fund Replenishment Update 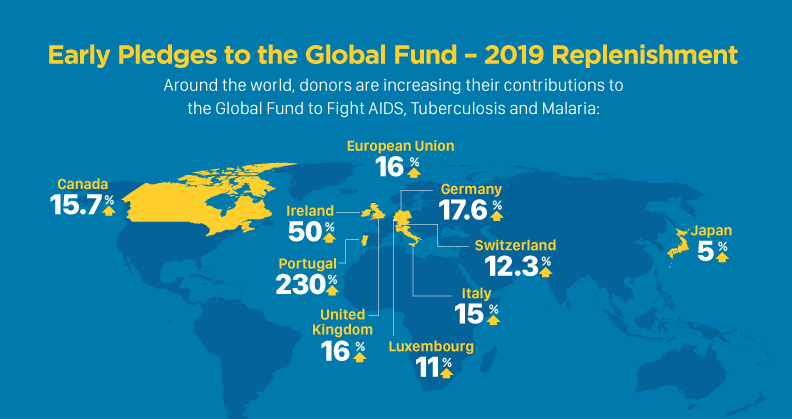 Every three years, the Global Fund runs a Replenishment campaign for governments, the private sector and foundations to pledge resources. Its Sixth Replenishment will take place October 9-10 in Lyon, France. The Global Fund’s Executive Director Peter Sands set a goal of at least $14 billion for the 2020-2022 period, releasing an investment case in January.

The Global Fund needs $14 billion to stay on track to achieve control of the three epidemics by 2030. Increased funding is also needed to overcome new challenges: adolescent girls and young women are more vulnerable to HIV/AIDS; there is a growing youth population in Africa; anti-microbial resistance is on the rise, especially multi-drug resistant TB; and there are threats of disease resurgence.

Other major donors around the world have stepped up already:

The increases by Germany, the UK and Canada exceed the 15 percent increase the U.S. advocacy community has requested from the U.S. Congress.

The Administration’s FY20 budget request proposed cuts to the Global Fund, and at the G7 Health Ministerial Meeting, Secretary of Health and Human Services Azar said that the White House “anticipates being able to make a $3.3 billion pledge to the Sixth Replenishment (2020-2022), while offering to match $1 from the United States for every $3 pledged by other donors” – reiterating proposed cuts and suggesting changes to how the U.S. has traditionally matched other donor funding.

However, in May, the House passed a bill appropriating $1.56 billion for the Global Fund, a $210 million annual or 15 percent increase. It also reinforced that the U.S. appropriations be disbursed to match other donors roughly $1 to $2, making up 33 percent of the Global Fund’s total budget, as it has in the past under law. The global health community is hopeful that after the recent deal to raise the FY2020-2021 budget caps, the Senate SFOPS bill will follow suit.

At the Replenishment conference in France in October, the stance of Congress will signal the U.S. commitment to the Global Fund. The House of Representatives has already appropriated $1.56 billion as the first increase for the Global Fund in six years, and the Senate is quite possibly moving toward the same increase.  The U.S. commitment, alongside strong funding from other donors encouraged by the U.S. match, would help implementing countries’ progress toward ending the three epidemics—and allow millions more to live in dignity and prosperity, freer from stigma and fear.