Power to the People: How to Democratize Global Health 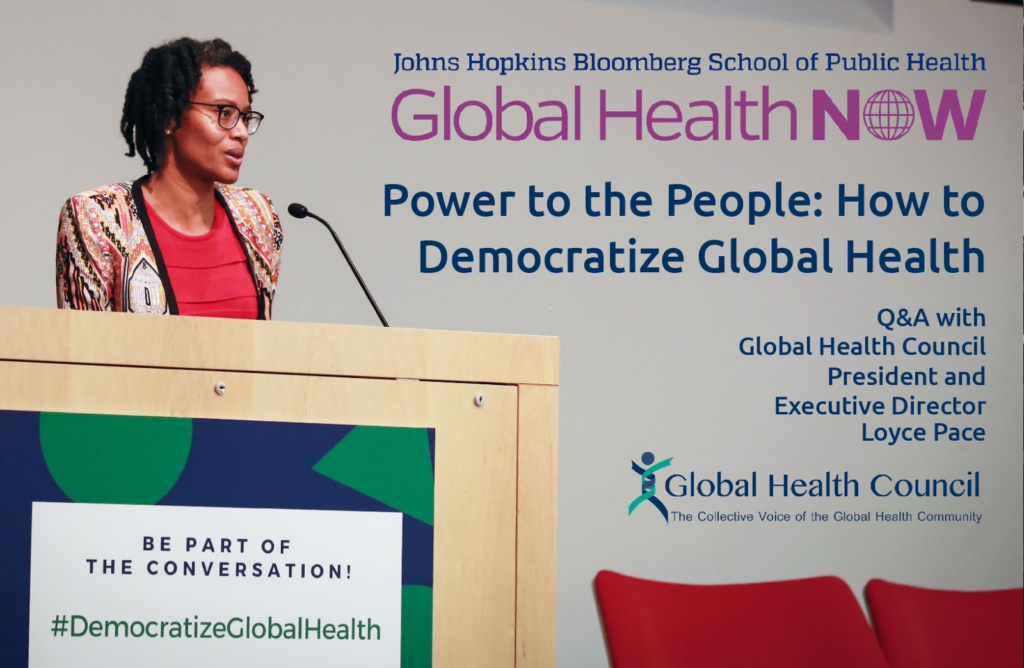 Here’s the stereotype of how global health programs are developed: Experts in wood-paneled rooms in Washington, DC or Geneva determine the priorities, the interventions and the money required. Then they tell countries what their problems are and how to fix them.

Here’s the goal: Representatives from national governments and local and civil society organizations share their expertise and work in partnership with donors—and ultimately on their own—to solve health problems.

The GHC convened nearly 200 experts last month at its annual Global Health Landscape Symposium to consider the opportunities of country ownership, the transition of financial responsibility for health programs, and other issues.

In this Q&A, Pace uncovers the challenges in democratizing global health and why it should be a rallying point for the field.

The recent Global Health Council Landscape Symposium based around the theme of democratize global health. What does that mean, and why is that important?

What we were trying to [do] is really highlight the issue of country ownership and leadership. It’s not a new idea necessarily, and yet there still has been a largely top-down approach to a lot of the work that we do. A lot of that has been driven by the donor or funding landscape. Our hope is that more and more global health programs truly are driven by [country] stakeholders, rather than donor or other outsider priorities.

Would you say then the traditional donor-driven approach—especially in vertical programs—is fundamentally undemocratic?

I would worry about how that’s being received and perceived, absolutely. I do think that a lot of our work, if we’re being honest, is based on a structure that is more top-down, more hierarchical, maybe a lot less collaborative. [But] I think over recent years there’s been an attempt to inject inclusion and true engagement and partnership.

By that, you mean not just having these discussions and setting priorities with national governments but also bringing local representatives and civil society to the table?

Absolutely. Country ownership is not just about government officials. It should absolutely [involve] stakeholders from across sectors and communities at the country level, very much including civil society.

What would you say to donors or representatives of developed countries who are genuinely looking to do good but who want to move quickly and may see bringing in these groups slowing things down?

That’s an interesting argument and a really good question because I do think that there’s a lot that can be done with fewer people, right? But without the diversity of people or stakeholders around the table, then that solution has a greater risk of not being applicable to a diverse array of stakeholders.

I think yes, it does take more time and effort [for] this engagement, but on the backend, the reward of progress and sustainability shouldn’t be undervalued.

USAID’s Journey to Self-Reliance strategy is about transitioning countries from foreign assistance; other organizations are moving in the same direction. How does the idea of democratizing of global health fit with this definition of country ownership?

I think it fits in really well. We’re truly committed to helping USAID understand how best to roll out this Journey to Self-Reliance. The ultimate goal [is] not to abandon country stakeholders but support them in taking the reins and enhancing the work that’s been done.

If donor countries are really intent on democratizing global health and ensuring that all people are at the table, what happens if a country government doesn’t necessarily want that? Then donors are in this odd position of dictating to achieve democratic goals.

That’s a very interesting point. Maybe this is where it’s really important to think about all country stakeholders and local stakeholders and not just the government stakeholders. It would be our goal to work with those community stakeholders to identify and understand what it is they’re seeking from country ownership.

In your review of the December symposium you said, “We can’t solve structural problems with technical solutions.” What did you mean by that?

Well, that came out of the opening discussion that we had. I was really inspired by what our keynote speaker [Keya Chatterjee, Executive Director, US Climate Action Network] shared. A lot of times we can be stuck on operational or other more concrete or tangible problems, and I think [we] have a tendency to think that we can kind of plan it away. Specifically what we’re talking about now are political challenges. They’re not necessarily technical challenges. You even hear Dr. Tedros [Adhanom Ghebreyesus, WHO Director-General] saying this often, when it comes to the universal health coverage, it’s a political choice. It can be done, and other stakeholders know how to deliver health care and you know how to deliver it at little cost.

It’s really going to come down much more to politics. And that’s an endorsement for advocacy and work in this space. It also brings us back to our overall theme of the importance of democracy and governance. I mean being inclusive of others in a way that honors their roles, their voices and truly democratizing global health—then you can finally get there.

The Global Health Council has been convening folks about this for a number of years now and what is coming across in those conversations is that this true focus on commitment to country ownership could be what reenergizes people in support of our cause. It’s truly important because I think it can inspire a new generation of individuals and players because they really come to know that we appreciate the roles they can play in the stake that they have.

Ed. Note: This interview has been edited for length and clarity.