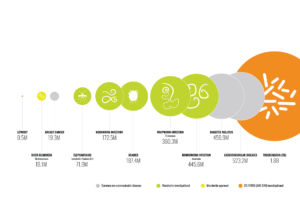 Visualization of the worldwide prevalence of select Neglected Tropical Diseases (including those for which moxidectin is being investigated), shown in relation to other commonly-described non-communicable diseases, and to tuberculosis. (Adapted from Global Burden of Disease study, 2019, IHME)

Medicines Development for Global Health (MDGH) is an independent biopharmaceutical company dedicated to the development of affordable medicines for the people who need them most. MDGH is a not-for-profit company that uses all funds in excess of running costs to develop medicines that address important unmet medical needs but may have limited commercial opportunities.

More than 80% of the world’s population live in low- and middle-income countries where innovative medicines are rarely available. The majority of new medicines are developed for diseases that are prevalent in high-income countries as the potential returns on an approved medicine offset the high cost and risk of development. This model is particularly punitive for the world’s poorest populations—according to the World Health Organization (WHO), an estimated two billion people do not have access to even the most basic of essential medicines.

MDGH undertakes product development to the most stringent of global regulatory standards and works with partners to ensure the delivery of medicines to those who need them most. The company is often listed among Product Development Partnerships (PDPs), but since it is able to undertake all stages of research and development it does not necessarily require a pharmaceutical company partner.

In June 2018, the FDA approved moxidectin for the treatment of the Neglected Tropical Disease (NTD) onchocerciasis (also known as river blindness), a devastating and debilitating microfilarial disease that causes intense itching, severe dermatitis and skin depigmentation. As the disease progresses it can also cause blindness, and this condition is the second-most common cause of infectious blindness in the world. 200 million people are estimated to be at risk from this disease, and its elimination is a longstanding goal for the WHO.

The debossed code on each moxidectin tablet acknowledges the dedication of two individuals who were instrumental in seeing this medicine brought to approval (Photo credit: Medicines Development for Global Health)

Moxidectin is only the second onchocerciasis medicine approved in over 30 years. In the largest phase 3 registrational trial, at 12 months – the primary endpoint – a single 8mg dose of moxidectin resulted in undetectable skin microfilariae in 45.9% of recipients, vs 5.4% of ivermectin recipients.

Studies are underway to gain WHO approval for Mass Drug Administration, including in pediatric populations. Recent modeling studies suggest moxidectin bears the potential to significantly reduce time to elimination of onchocerciasis relative to ivermectin.

Additionally, Phase 2 and 3 trials are underway exploring moxidectin’s potential to address several other important NTDs including scabies (estimated 300 million at risk), lymphatic filariasis (71 million), Strongyloides (600 million), and soil-transmitted helminths (up to 1.5 billion). In 2020 MDGH licensed CC-11050 from Amgen, to continue its development in leprosy and tuberculosis.

At the heart of MDGH’s vision is the commitment to collaborate with any organization or individual with a mission for solving these massive health challenges. This commitment is reinforced with every tablet MDGH manufactures. The debossed code on every tablet – AKKA – acknowledges the passion of two individuals whose vision and tenacity have been central to the development of moxidectin: Dr Annette Kuesel from TDR (the Special Programme for Research and Training in Tropical Diseases), and the late Dr Kwablah Awadzi who was a monumental figure in the fight against river blindness.

Medicines Development for Global Health’s mission is to address health inequity by putting new and improved medicines into the hands of people who need them most.