At the beginning of the 21st century, several countries vowed to end preventable child and maternal deaths worldwide. To date, those verbal commitments, which were backed by substantial investments, have cut maternal and child deaths worldwide in half. Such a remarkable achievement should be celebrated, but not without acknowledging that we have not yet reached the finish line.

A new report released this week from USAID, Acting on the Call: A focus on the journey to self-reliance for preventing child and maternal deaths, cites the progress made by the U.S. government over the past year in reducing the rates of these deaths as well as the work that still needs to be done. According to the report, in 2018, USAID helped 81 million women and children access critical health services, including nutrition services and treatment for diarrhea and pneumonia. Still, we know that every day, 15,000 children under the age of 5 die from mainly preventable or treatable causes and over 830 women die each day due to complications during pregnancy and childbirth.

To close this gap, USAID has been refining its strategy to reach its target goals and maximize its current funding. As a result, the agency has invested in developing high-impact interventions and increasing the capacity and commitment of its 25 partner countries in order to achieve an agency-wide focus of putting countries on “the journey to self-reliance.” This framework, which was rolled out in 2018, aims to effectively end foreign assistance once countries are able to “achieve locally-sustained results”  including the provision of health services to their citizens. To accelerate this journey to self-reliance, USAID developed a set of key principles: drive accountability, mobilize domestic resources, engage the private sector, and build in country capacity, which they elaborate on in their report. 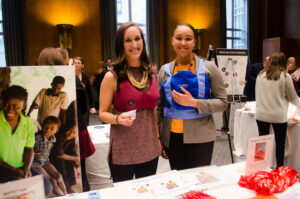 On the point of developing high-impact interventions, the report calls out nutrition as an area that could result in significant reduction of child and maternal deaths, if addressed properly. Currently, according to the report, malnutrition is an underlying cause of 45 percent of child deaths and 20 percent of maternal deaths worldwide. Malnutrition does not only cause death, but also stunting, which can result in health issues throughout life. In fact, if children do not receive essential nutrients from their time in utero to their second birthday, their brains do not develop fully, leading to lower IQs and a decrease in lifelong productivity. The good news is that simple, cost-effective interventions could prevent both deaths and future hardship. Take for instance GHC member Save the Children, which is working alongside USAID in countries like Ethiopia and Cambodia to promote effective interventions such as breastfeeding and access to essential micronutrients  through fortification, supplementation and dietary diversity measures.

It is important to underline the word cost-effective when it comes to these interventions. In FY 2019, the U.S. government invested $835 million in maternal and child health programs and $145 million in nutrition programs at USAID. Although this may seem like a modest amount of funding, a little can go a long way. For instance, every $1 invested in breastfeeding generates an estimated $35 in economic returns. Moreover, USAID endeavours to make their program dollars as effective as possible. In fact, the agency underwent a review process by the Award Cost Efficiency Study (ACES) Blue Ribbon Advisory Panel in 2014 to identify improvements needed to maximize their investments.

It’s clear that we have the global health solutions to save children and mothers around the globe, but we need to keep investing in and expanding those programs so we can end preventable child and maternal deaths once and for all.

This blog post was written by Global Health Council staff.