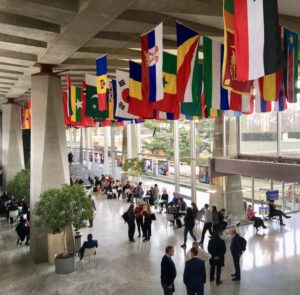 In 2017, concerns over immigrant health moved World Health Organization (WHO) Member States to request that the WHO Director-General develop a framework for Member States, in consultation with the United Nations High Commissioner for Refugees (UNHCR), the International Organization for Migration (IOM), and Member States themselves, to meet the healthcare needs of refugees and migrants in accordance with the New York Declaration for Refugees and Migrants.  Later that year, the Member States requested in resolution WHA70.15 that a Global Action Plan be prepared for the Seventy-second World Health Assembly (WHA72) in May 2019.

In response to this, the Director-General released his report, Promoting the health of refugees and migrants draft global action plan, 2019-2023 (the Global Action Plan), in early 2019 at the 144th session of the Executive Board (EB144) at WHO headquarters.

Attempts to address the health of vulnerable migrants and refugees are not new to the international community. See some notable moments over the last century below:

Meanwhile, the world anxiously awaits to see if revisions of the Global Action Plan (Promoting the health of refugees and migrants draft global action plan, 2019-2023) will be accepted at the Seventy-second World Health Assembly (WHA72) May 20-28, 2019 in Geneva, Switzerland.

This blog post was written by Elizabeth Montgomery Collins, MD, MPH, DTM. Dr. Collins is a member of the Global Health Council’s President’s Advisory Council and has served on several occasions as an individual delegate to the World Health Organization Executive Board meetings and the World Health Assembly.