How the Environment Affects Our Health 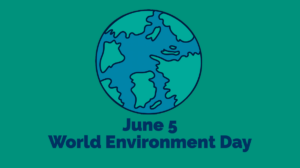 World Environment Day is celebrated on June 5 every year and is a time to promote worldwide awareness and action for the environment. The theme for this year is “Ecosystem Restoration” which calls for urgent measures to revive damaged ecosystems. Human consumption and rapid population growth have contributed to the world’s biodiversity and ecosystems being degraded at an unprecedented rate. According to the United Nations, the world loses a field worth of forest every three seconds and half of the world’s wetlands have been destroyed over the last century. Consequently, these drastic environmental changes have provided new opportunities for diseases to emerge and poor health outcomes in both humans and other species.

As the climate continues to change, waterborne diseases such as cholera, diarrhea, and typhoid are likely to become more common. Rising temperatures and sea levels along with heavy rainfall, flooding, and droughts have put pressure on water resources and increased the risk of exposure to unsafe water. As stated in our 2021 Global Health Briefing Book, 785 million people still lack access to clean water and 2 billion don’t have a toilet. In effect, these environmental issues are exacerbating existing inequalities for vulnerable groups.

Equally important, approximately 3 out of every 4 new or emerging infectious diseases in humans are zoonotic, meaning that they are transmitted to people by animals. Consumer demand for meat and dairy products has led to the expansion of cropland and more livestock farming, increasing the risk of humans being exposed to potential pathogens. For some zoonoses, livestock can serve as an “epidemiological bridge” between wildlife and human infections and is responsible for about 2.5 billion cases of illness and 2.7 million deaths each year. Examples of zoonotic diseases include Ebola, Zika, Middle East Respiratory Syndrome (MERS), and possibly COVID-19.

Global disease experts have recognized that a One Health approach is crucial to addressing emerging infectious disease threats. This approach acknowledges the links between the health of people, animals, and the environment and highlights the need for specialists in multiple sectors in monitoring and controlling public health threats as well as preventing disruptions to agri-food systems. By promoting collaboration across all sectors, a One Health approach can tackle issues such as zoonoses and harmful changes to our climate to achieve the best health outcomes for all.