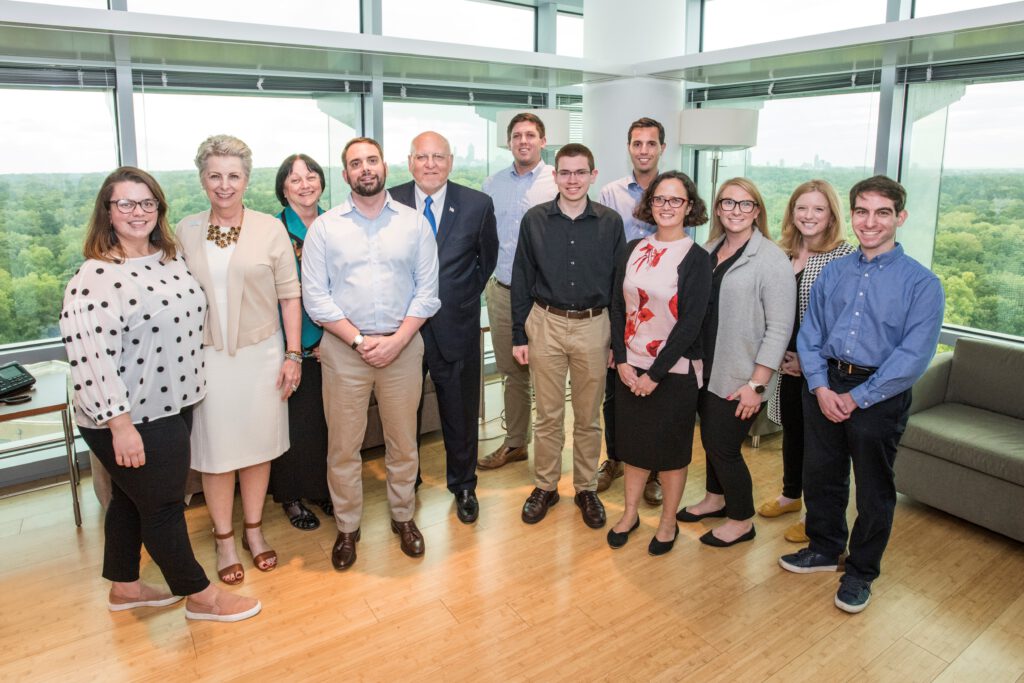 On July 1, 1946, the Communicable Disease Center (CDC) opened in Atlanta, Georgia, instead of Washington DC, because the south was experiencing the nation’s highest transmission of malaria. It was given a small budget and a primary mission: to prevent the spread of malaria across the U.S. With the help of state and local health agencies, it succeeded. Malaria was eliminated (though not eradicated) in the U.S. as a major public health problem in 1949. The CDC’s role soon became one of surveillance inside the U.S. and of assistance around the world in the ongoing fight to control malaria.

Today, 73 years later, the CDC focuses on all communicable diseases. Renamed Centers for Disease Control and Prevention in 1992, it is now the nation’s leading health promotion, prevention, and preparedness agency.

For this reason, and because of CDC’s location outside the DC area, GHC partnered with member organizations to bring congressional staff to Atlanta for an up-close look at CDC’s work around global health. “It’s an opportunity for congressional staff to meet with senior CDC staff that work on specific global health programs and see the activities they undertake,” says Heiberg. “As well, it’s a great way to better understand how U.S. investments at CDC are used to protect the health of Americans and others around the world.”

In early October, GHC, along with member partners American Society of Tropical Medicine and Hygiene, PATH, and Global Health Technologies Coalition, accompanied a bipartisan congressional staff delegation to CDC, a first visit for most of the seven staffers.

CDC senior staff provided an unforgettable day showing how CDC staff work 24/7 around the globe to stop health threats at their source, and why a disease threat anywhere is a disease threat everywhere.

Dr. Rebecca Martin, Director of CDC’s Center for Global Health, along with directors of other individual centers, began the morning with an overview of their programs and the types of research they conduct. The delegation was then treated to a tour of that research in action.  Highlights included:

The Emergency Operation Center, where CDC monitors and responds to infectious disease outbreaks around the world, 24/7. Doctors or hospitals from around the nation can call anytime to report concerns of potential outbreaks.

The Insectary and Parasitic Diseases Lab, where CDC does testing on what one scientist called “expensive” malarial and non-malarial mosquitos.  (The World Health Organization, a CDC partner, reported nearly half the world’s population in 91 countries and territories continue to be at risk of malaria transmission.)

Global HIV and TB Labs, where the fight against these diseases continue with work that includes viral load and early infant diagnosis, drug resistance, serology/incidence, and clinical monitoring.

In addition to the tour, the delegation was debriefed on CDC’s work in the ongoing Ebola crisis in the Democratic Republic of Congo and on the measles outbreak in the U.S. and around the world, including a discussion on global immunization to eliminate measles and rubella.

Near the end of the day, the delegation met with Dr. Robert Redfield, Director of the CDC. A public health leader for 30 years, his work in virology has contributed substantially to the understanding of HIV. Dr. Redfield focused on how CDC’s work compliments the work at the National Institutes of Health and the continued need to invest in the infrastructure of the agency to continue the work it does in the U.S. and around the world.

The CDC has grown exponentially in 73 years. Its first primary mission to prevent the spread of malaria in the U.S. has morphed into a global effort to combat major health threats like polio, zika, cholera, TB, and HIV. While its influence and expertise around global public health grows ever more vital, its aspirations to create and maintain a healthier world remain steadfast.

GHC and its member partners thank the CDC and the house congressional staff delegation for an extraordinary day.  We look forward to doing it again!